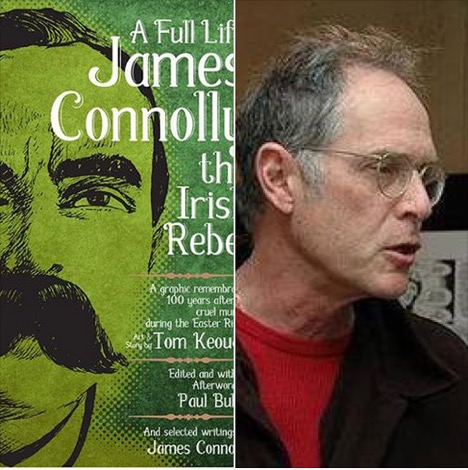 Thorne Dreyer's guest is historian Paul Buhle, a leading figure on the American Left since the 1960s, who now produces radical comics. Buhle is the editor of "A Full Life: James Connolly the Irish Rebel," subtitled, "A graphic remembrance 100 years after his cruel murder during the Easter Rising." Paul also wrote an afterward to the comic (which was illustrated by Tom Keough and also includes selected writings by James Connolly). This pamphlet, the first graphic treatment of Connolly's life, was issued on the centenary of the Easter Rising by PM Press.

On the show we discuss the life of James Connolly, his role in the fight for Irish independence and in the historic Easter Rising rebellion, and his death before a British firing squad. We also talk about Connolly's time in the United States where he organized for the IWW. And we discuss the history of and role of radical comics and graphic histories and the fundamental part in their development played by Austin-based comix artists Gilbert Shelton and Jack Jackson (Jaxon).

Paul Buhle, a former senior lecturer at Brown University, was active in the civil rights movement and worked with SDS in the Sixties. He was founding editor of the influential journal, Radical America (1967-1999) and his Radical America Komiks, produced in collaboration with underground comix pioneer Gilbert Shelton of Austin, helped introduce the radical new medium to the American Left. Buhle's writing has appeared on -- and his work has been reviewed at -- The Rag Blog (http://www.theragblog.com/tag/paul-buhle/) and he was also our guest on Rag Radio (https://archive.org/details/RagRadio2013-12-20-PaulBuhle), December 20, 2013, to discuss his comic, "Radical Jesus: A Graphic History of Faith."

Executed by a British firing squad on May 12, 1916, for his role in organizing the Easter Rising, James Connolly was one of the most prominent radical organizers and agitators of his day and was also an influential socialist writer and theoretician. Born in Scotland in 1868 to Irish immigrant parents, Connolly spent most of his adult life organizing for labor unions and socialist organizations in Ireland, Scotland, and the United States. Connolly stressed the importance of direct action, broad working-class unity, and a commitment to ending labor's exploitation.

The Easter Rising, also known as the Easter Rebellion, was an armed insurrection in Ireland during Easter Week, April 1916. The Rising was launched by Irish republicans to end British rule in Ireland and establish an independent Irish Republic while the United Kingdom was heavily engaged in World War I. Almost 500 people were killed in the rebellion which was brutally suppressed by the British government but laid the foundation for the establishment of an independent revolutionary Irish state.

Rag Radio (www.theragblog.com/rag-radio/) is produced in the studios of KOOP 91.7-FM, an all-volunteer, cooperatively-run community radio station in Austin, Texas, in association with The Rag Blog (TheRagBlog.com) and the New Journalism Project, a Texas 501(c)(3) nonprofit. The host and producer of Rag Radio, Thorne Dreyer, is a prominent Austin-based activist and writer who was a pioneer of the ’60s underground press movement. The show’s engineer and co-producer is Tracey Schulz and the staff photographer is Roger Baker. The syndicated show is broadcast (and streamed) live Fridays, 2-3 p.m. (Central) on KOOP (www.koop.org/listen-now), and is later rebroadcast and streamed on WFTE-FM in Mt. Cobb and Scranton, PA., on Houston Pacifica's KPFT HD-3 90.1, and by KKRN, 88.5-FM in Round Mountain, CA -- and as a featured podcast at Veterans Today (VeteransToday.com). Contact: ragradio@koop.org. Running time: 56:44.